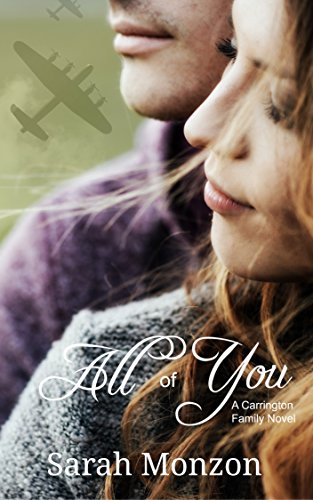 Maryland, Present Day
Jacquelyn Rogers can rebuild anything…except the shambles of her past. A restorer of vintage planes, she’s worked hard to earn the reputation of being one of the guys. The last thing she needs is a former Navy pilot fighting his own inner demons stepping in to defend her from dangers she thought she’d outrun long ago. Some battles must be fought alone.

After a freak accident severs Lieutenant Michael “Finch” Carrington’s dreams, as well as two limbs, he’s left with nothing but a fragile faith and a duty-bound promise to watch out for his friend’s baby sister. A promise she insists is as unnecessary as it is unappreciated. But when she turns the tables and begins to weld together the broken parts of his life, it may be his heart that is in need of protection.

England, 1944
With the world at war yet again, Alice Galloway rejects her father’s traditional expectations and offers her piloting expertise to the Air Transport Auxiliary. She may be a woman in a man’s world, but when she overhears key intelligence, she must find the strength to transcend boundaries and her own fears. Or countless people may die.

Sometimes the past reaches forward to bring hope to the future.

My Thoughts:
Sarah Monzon’s All of You was a great book. So many aspects of this book that I enjoyed and appreciated! The dual timeline was very well done. I am not usually a fan of dual timeline novels because they can end up being confusing and frustrating if not well done, but Ms. Monzon has a talent for writing dual timeline in such away that is clear and easy to follow. I was very quickly captured and drawn into the stories happening in both timelines. All of You was filled with vivid scenes and images that really took me to those places and those times and made me feel the intensity of emotions in those moments from both the present day story and the historical one. One scene in particular made me tear up right along with the characters. There are some wonderful supporting characters who really added to the atmosphere created in the book and made it even more fun to read.

For the most part, I enjoyed both couples from the book. I appreciated that they all had their flaws and things were not perfect in their lives, but I do have to admit that at times some of the things the characters did, some of the actions they took frustrated me. Determination can be a good thing, but stubborn refusal to accept or ask for help and thinking that some task lies solely on your shoulders when it really doesn’t is not a good thing. At times, some of the actions of female leads bordered on this line for me and I found that to be a bit frustrating.

While there were some situations that frustrated me, there were a great many other things that I appreciated about the book. As mentioned before, the characters in this book do not have perfect lives. They are characters who are experiencing real life struggles and the pain that goes with those struggles. They’ve been dealt some tough blows and Ms. Monzon takes you on the journey with them as they figure out how to come to terms with what’s happened in their lives and how to live and move on. As each character processes and works through their own struggles, the reader is allowed inside their hearts to feel those emotions with them.

Possible Spoiler Alert: Some may consider the following two paragraphs to contain spoilers. I do address some of the areas the characters struggle in while not telling what leads to or causes those struggles.

Both Jack’s and Michael’s struggles spoke to me because in some ways they are similar to some of my own battles. Jack is a bit of a spitfire yet she struggles with insecurity, in part due to something that happened in her past. I know a little bit about this myself. I’m about Jack’s height (with a few extra pounds) and my nickname gained in college is Small Feisty Woman. I can be pretty feisty and just a bit passionate about the things I believe in. I am not often like the bubbly or meek personalities out there, and as a woman, I have often felt very insecure about truly being myself because I’m not like the other women I see around me. I know, too, the struggle of feeling like I’m not enough, like I don’t measure up. Jack and even Michael were very relatable to me because of their own struggles with this.

Michael battles against lies the enemy throws at him in an attempt to keep him down, to keep him from seeking and discovering God’s will. I know what it’s like to battle that way, to feel like I’m being bombarded with hits and lies by the enemy, then to experience a little victory only to have yet more lies come to battle on the very heels of that victory. To have those moments of hope and have to fight to hang on to them when doubts are thrown that are meant to cause me to detour from what God wants for me. Those very real struggles were portrayed well in Michael Carrington and I could relate easily to his frustrations.

There are a few other themes and aspects from All of You that I wish I had time to mention, but I will just have to leave those for you to discover for yourself as you read it.

God often uses the grit of real life to sand away our rough edges and make us more like Him and to bring us to a place where we know Him better. It’s our choice on whether or not we let Him do that with our lives, with our pain and hurt and frustrations. All of You is a story that very ably demonstrates that very aspect of God’s work in our lives and it’s worth the read!

PS—I am very much looking forward to discovering more about the remaining Carrington siblings in Ms. Monzon’s future books in the series.

Finders Keepers, the first book in Sarah Monzon’s Carrington Family series, is free on Kindle for a limited time in celebration of All of You releasing. It’s another fantastically done dual timeline novel and worth checking out. If you happen to have Kindle Unlimited, All of You is available to read for free through that program.

**I received a copy of this book from the author and have chosen to review it. My opinions are my own.

Julie Jobe's favorite books »
Share book reviews and ratings with Julie, and even join a book club on Goodreads.